Beautiful letters penned by one of the design Team at online home and giftware store – Terrain.

They’re beautiful, aren’t they? What if we told you that the newest member of our design team penned each one by hand for his lady love? It’s okay if you need a moment… We certainly did. In fact, it was in-part these letters that convinced us to hire Justin on the spot after their recipient, Sarah, insisted he bring them along for his interview. The pair has since gamely agreed to share them again here, along with their story and a few words of love letter wisdom.

terrain: We’d love to know more about the history here. How did these letters come about?

Justin: I wrote the first one the summer I met Sarah. We were at camps near each other and there was no phone or internet, so I initially wrote them out of necessity.

terrain: How sweet! How did she react when she got the first one?

Justin: I think she was surprised and a little skeptical. We had only ever spoken for about a half hour before I sent the first one, so I think I was about three letters deep before winning her over. It’s funny, we really didn’t know each other at all, so we were actually getting to know each other through writing letters which doesn’t happen that often anymore.

terrain: No, it certainly doesn’t. Which reminds us, with the season of love letters approaching, do you have any tips for those of us who might not be so artistically inclined?

Justin: I don’t think your letters have to look like art, it’s really just sending and receiving something handmade that’s the big thing. And tying in materials with sentimental value helps too. One of the letters I sent Sarah was made from a Kraft Macaroni box we shared. 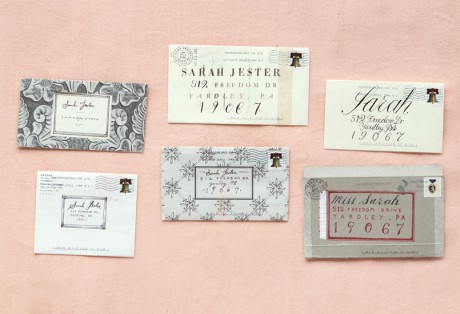