With Thomas Vinterberg’s retelling of Thomas Hardy’s Far from The Madding Crowd hitting theaters today, I thought it was a good excuse to look back at an earlier adaptation that spawned some memorable poster art.
Made in 1967, John Schlesinger’s corseted rural love quadrangle was a far cry from the biting contemporary urban dramas like Billy Liar and Darling that had made his name. Schlesinger defended his decision to direct a big budget Victorian costume drama by saying “I wanted to get away from a contemporary subject. People are tiring of the flip side. Contemporary is dated,” but in ’67—the year so beautifully chronicled in Mark Harris’s Pictures at a Revolution as the year Old Hollywood ceded to the New—Far from the Madding Crowd, shot in 70mm and nearly 3 hours long, was inevitably overshadowed by the nowness of the likes of The Graduate and Bonnie and Clyde. Even Bosley Crowther, not known as a champion of envelope-pushing innovation, complained in the New York Times about the film’s “antiquated narrative form” and said that “Mr. Schlesinger has committed nothing fresh or even contemporary in the way of cinematic story-telling in this film, except for some rather handsome and slightly self-conscious photographic and editing techniques.”

But try telling any of that to Polish designer Bronislaw Zelek (b. 1935), whose poster for Schlesinger’s Hardy adaptation, above, is startlingly bold and contemporary. Dispensing with the stars’ faces (and such attractive faces they were) it could stand for Darling as easily as for Madding Crowd, though the plane of red clearly represents the startlingly red tunic of Terence Stamp’s swashbuckling Sergeant Troy. (If nothing else, Madding Crowd is worth seeing again for Nic Roeg’s dazzling cinematography. In a letter to his producer Schlesinger writes “I must say, I am looking forward to getting back to HPS* and normal wide screen though I have an inventive cameraman who does not seem frightened of being bold with colour and Panavision.”)

The Czech poster, by Břetislav Šebek (1925-1998), below, is equally remarkable with its monochrome cut out of Julie Christie in flight against a red-on-red background with some kind of a feather motif. It looks like a medieval manuscript re-imagined for the French New Wave.

The US one sheet, more conventionally illustrated by Howard Terpning, tries to give the film a contemporary feel (Christie’s hair looks much more 1960s than 1860s) and saddles it with an overwrought and banal romance novel tagline.

But when the film played in 35mm “at popular prices” it got a new poster that played up Christie and Alan Bates and yet ended up looking even more Harlequin Romantic than the first one.

The UK quad, again playing up Christie, uses the US art (though Peter Finch has been notably redrawn).

And then there is this most unusual, bright yellow, 8 foot by 10 foot French poster by Georges Kerfeyser that dispenses with everything but the girl.

And the Romanian poster does much the same, though less colorfully.

One final piece of Madding ephemera I came across was this promotional caricature of the cast by the great Al Hirschfeld (1903-2003).

The film was re-released in the UK earlier this year with this rather lovely quad poster (again the red tunic).

And I do quite like at least one of the new posters for Vinterberg’s film which, as with Zelek’s poster, dispenses with stars’ faces in favor of a romantic clinch and that splash of red.

You can see the trailer for the 1967 film here, and for the new film here.
Via: Movie Poster Of the Week 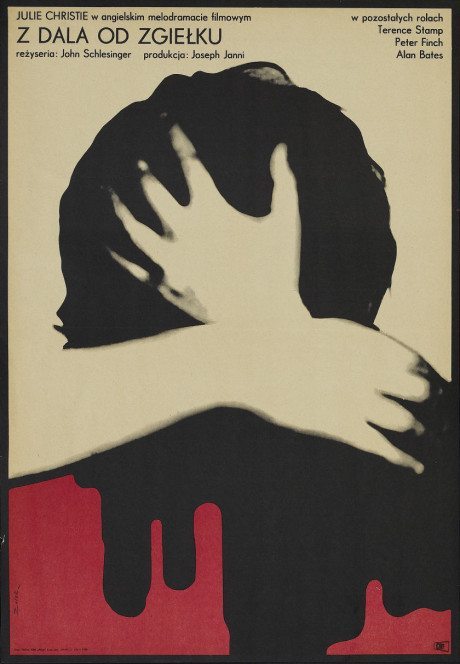 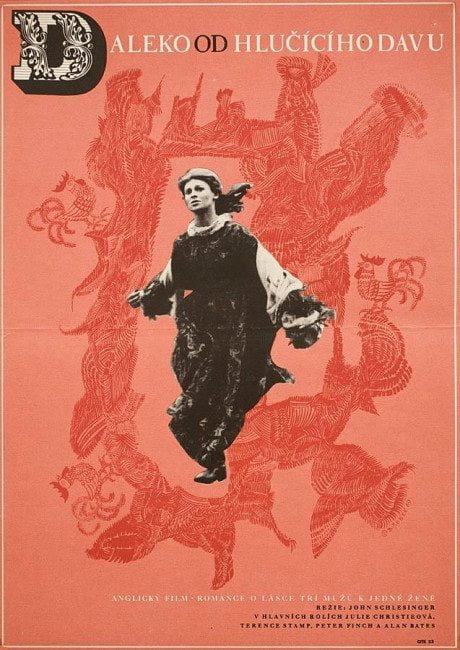 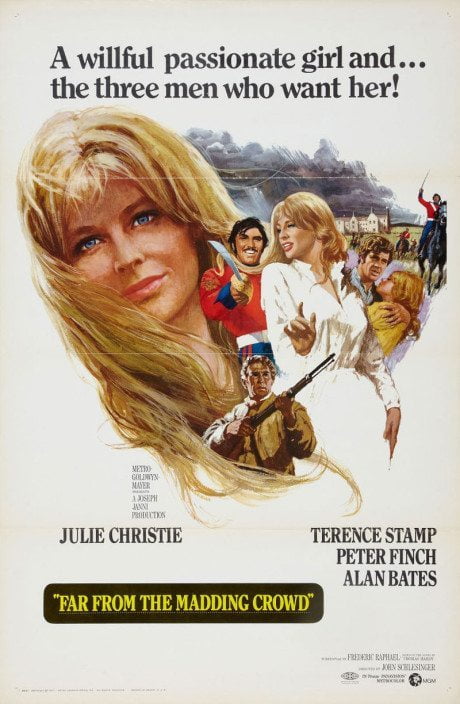 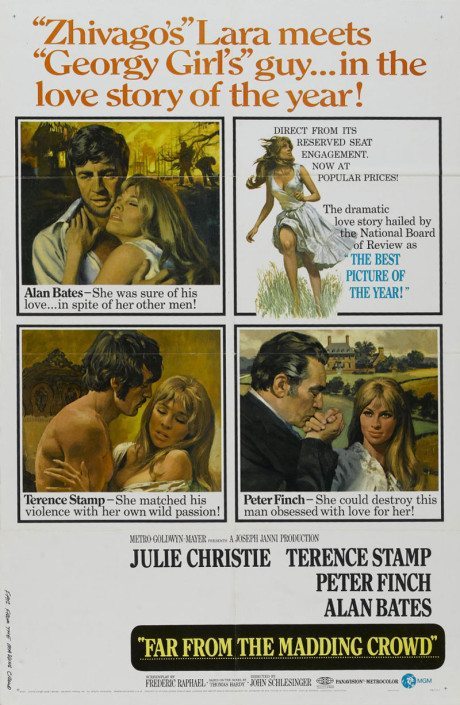 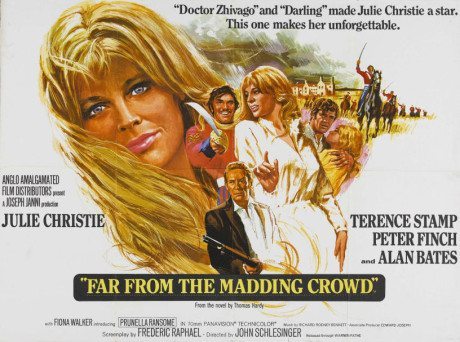 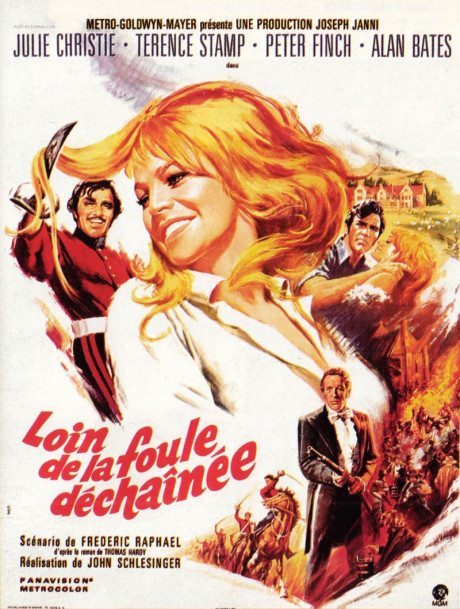 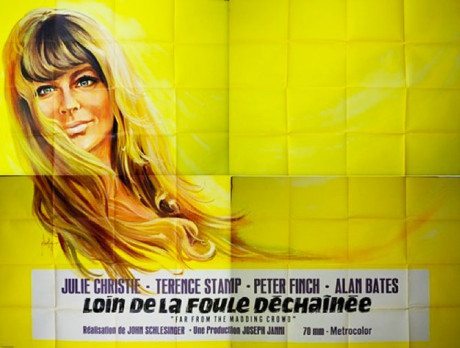 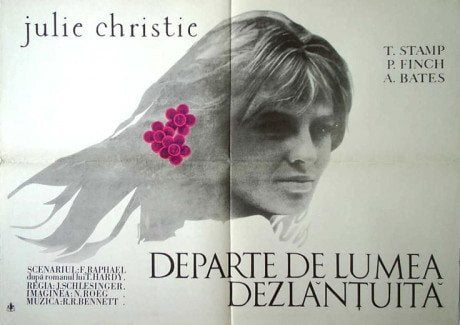 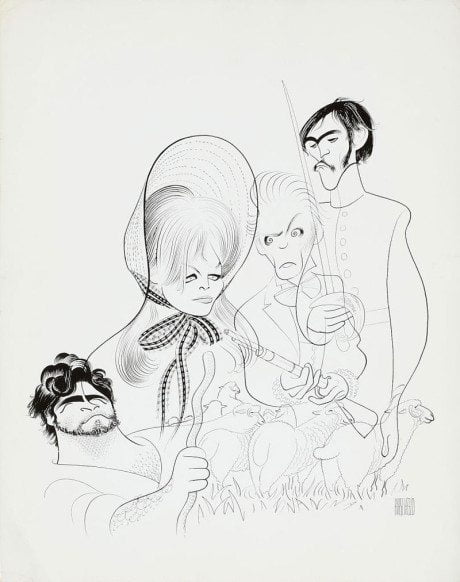 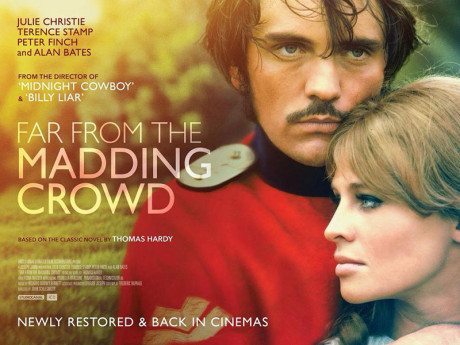 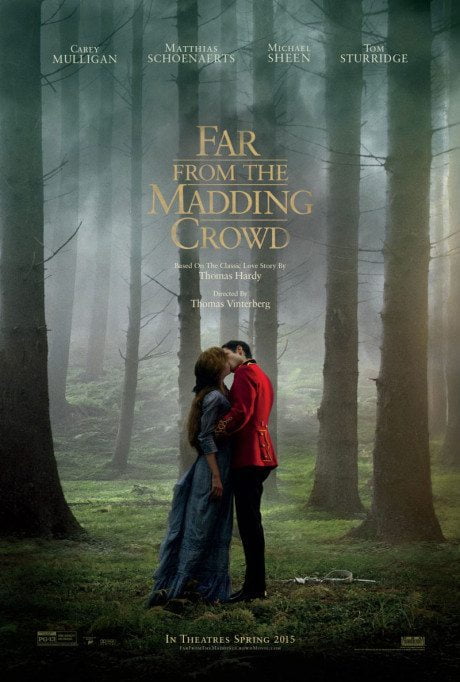